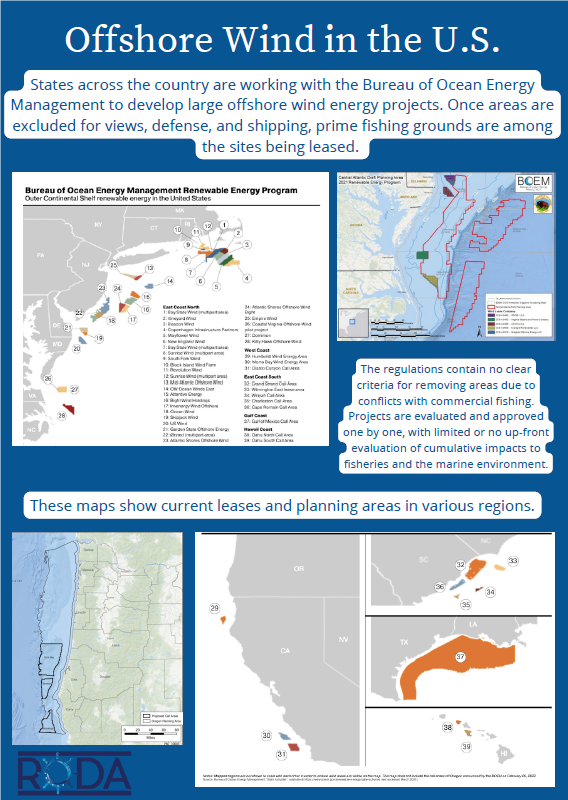 BOEM plans to announce Friday, Feb. 25, 2022, more than one “call area” off Oregon. BOEM identifies these ocean areas with high wind potential as places companies might want to develop to harness the energy of offshore wind. These massive areas, covering 2,181 square miles, already are utilized by the fishermen to harvest nutritious, sustainable seafood proteins.

As part of its process, BOEM will solicit interest from wind energy developers before doing a basic environmental assessment of the areas. Comprehensive environmental studies will be completed later after leases are already issued and enormous investments are already made.

“The effect of offshore wind development on fisheries, the habitat, and the California Current is unknown. Placing giant turbines and anchors in a current system that is largely free-flowing and structure-free could cause irreparable harm to seabirds, marine mammals, fisheries management regimes, and more,” Southern Oregon Ocean Resource Coalition (SOORC) Chair Susan Chambers said. “Robust environmental analyses need to be completed before areas are identified and leased, not after. Our productive California Current must be protected.”

Fishermen already are questioning the value of placing turbines in areas off Morro Bay and Humboldt Bay, Calif. The early environmental analyses and area identification memos of those areas included very little socio-economic data regarding the potential effects on the seafood industry and no consideration of the cumulative impacts of potential additional wind farms off the U.S. West Coast.

“These turbines are going to blow me off the water,” Fishermen’s Marketing Association President Travis Hunter said. Hunter and his family have fished for years off southern Oregon and northern California and in the Humboldt Wind Energy Area. “These areas will displace hard-working fishermen.”

The seafood industry recognizes the value of renewable energy, but at what cost? Fishermen and processors have their roots in coastal communities. Displacing them in favor of large out-of-town – and frequently out-of-country – companies is a net loss.

“Developers are largely funded by foreign companies. Most of the profits, at Oregon taxpayers’ expense, will be funneled overseas. This is not ‘the Oregon way,’” Shrimp Producers Marketing Cooperative Secretary Nick Edwards said. 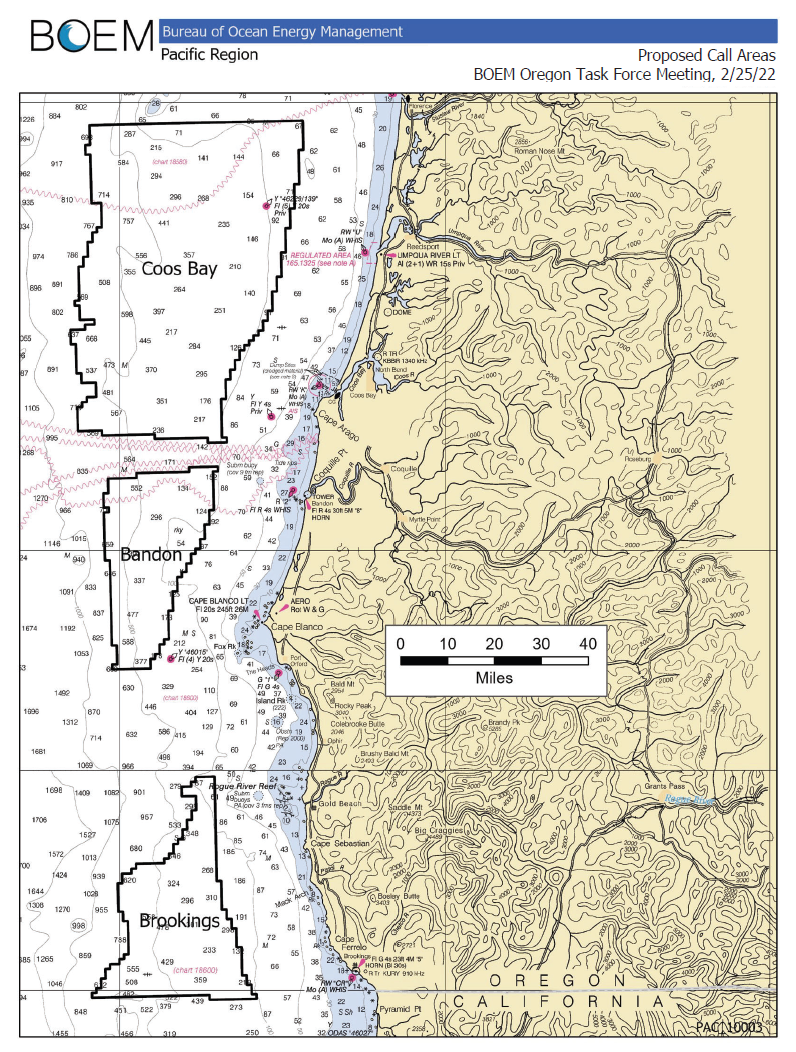 The future of several Oregon commercial fisheries, processors, fishery-related businesses, and the economic development coastal communities derive from those industries, hang in the balance.

“This is what results from government agency lip service versus authentic engagement,” said Heather Mann, Director of the Midwater Trawlers Cooperative.  She was speaking in response to last night’s revelation that the Bureau of Energy and Management’s Oregon (BOEM) call areas for offshore wind energy development cover more than 2,000 square miles of productive fishing grounds in Southern Oregon.  “BOEM has essentially chosen prime fishing areas for turbines threatening not just Oregon harvesting and processing jobs, but food security as well.”

Fishing groups all along the West Coast have been pleading with BOEM to have a seat at the table, not be a mime in the check-the-box outreach that often happens with government agencies.

“The importance of where these gigantic, floating wind farms are placed cannot be underemphasized. If we do not get this decision absolutely correct, the fallout could have a dire domino economic effect on all Oregon commercial fisheries, including the vitally important Oregon Dungeness crab fishery,” Oregon Dungeness Crab Commission Executive Director Hugh Link said.

Several seafood industry members are expected to speak at the BOEM Oregon Renewable Energy Task Force meeting Friday, during which the public may also provide comments. More information about the meeting, including the registration link, can be found here and here.