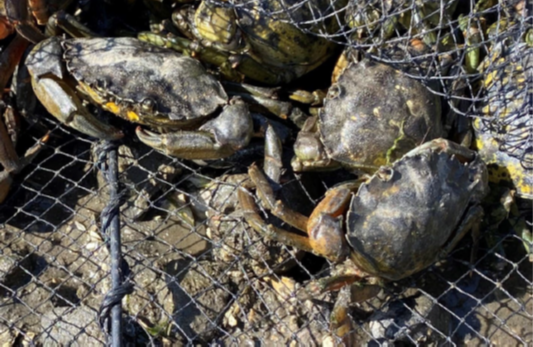 The 5-spine crab (Carcinus maenas) has been transported around the world during the last century and has colonized many temperate coastlines (Behrens Yamada 2001). The trait best used to distinguish Carcinus maenus from other crabs along the west coast of North America are the 5 spines on either side of the eyes. In conversations with the Oregon Department of Fish and Wildlife staff the primary concern with community-based trapping programs is the potential for mis-identification and the resulting destruction of native crab species, since some have green coloration and could therefore could be mistaken for “green” crabs. South Slough Reserve suggested changing the common name to 5-spine crab since that imparts a better identification trait than green crab. They note that in the 5-spine crab’s native range in Europe, it is called the common shore crab, not the “green” crab. To advocate for the change in name the reserve will use 5-spine crab for this report.

Numerous research studies have examined the biology and ecology of 5-spine crabs and have found the 5-spine crab to be an aggressive invader that negatively effects native species, important estuarine and marine habitats, and fisheries (Behrens Yamada, 2001; Grosholz et al., 2011; Malyshev & Quijo´n, 2011; Garbary et al., 2014; Neckles, 2015; Matheson et al., 2016; Howard et al., 2019; Green and Grosholz 2021). The 5-spine crab is currently invading the west coast of North America. 5-spine crabs became established in the San Francisco estuary prior to 1989 (Behrens Yamada, 2001). Since then, coastal currents have been seeding 5-spine crab larvae into estuaries of the Pacific Northwest, including Coos Bay (Behrens Yamada et al., 2015). In the past, this migration appears to be linked to strong northwards currents during El Niño years (Behrens Yamada et al., 2015; Behrens Yamada et al., 2021), as indicated by a mixture of high abundance years, low abundance years, and extinction events. However, since 2016 the abundance of 5-spine crabs has been continuously increasing in Coos Bay and is now at levels where negative impacts are expected to occur. The purpose of this project is to monitor changes in 5-spine crab abundance and annual recruitment in the Coos Bay Estuary. The project goals are to: 1) examine change in 5-spine crab abundance (CPUE) among sites and over time, 2) examine the young-of-the-year new recruit age class to assess size structure and determine whether recruitment is occurring from within Coos Bay.

Methods:
At each of the sites the group set either Fukui fish traps and/or crayfish traps (5cm trap opening) during morning low tide and retrieved traps at low tide the following morning (24 hours). Sets of traps were set as 6 traps per site. Fukui and crayfish traps were baited with raw tuna enclosed in a plastic bait container and staked in place with a 20 inch steel rod. When traps were retrieved, the number of individuals of each crab species in each trap was recorded. Dungeness crabs (Metacarcinus magister), red rock crabs (Cancer productus), and shore crabs (Hemigrapsus oregonensis and H. nudis) were counted but not measured. When possible, the water quality data was reported (salinity, pH, temperature) at the trap site using a YSI hand-held meter. European 5-spine crabs (Carcinus maenas) were counted in the field and then brought back to the laboratory and measured for size (carapace width, mm), weight (g), and sex (m/f). Abdomen color and missing limbs were also recorded.

Results:
South Slough Reserve set 393 crab traps (243 Fukui, 150 crayfish) at 12 sites in Coos Bay from June through September of 2022. They captured 941 green, 413 Oregon shore, 407 Dungeness, and 129 red rock crabs. This includes data for all traps at all sites for all sampling dates from June thru September 2022.
Abundance among Coos Bay sites:
To better compare adult abundance over time, The reserve selected only the 10 sites sampled using Fukui traps during the summer months (May-August) (Table 1). The average CPUE was highly dependent on site. 5-spine crabs were found at all sites but were most common in the mid to upper estuary sites where adult Dungeness and red rock crabs were absent (Coos History Museum, Isthmus Slough, Joe Ney Slough). Red rock crabs were present only at sites lower in the estuary (Charleston Boat Basin, Empire Docks) and adult Dungeness crabs were most abundant at low and mid-estuary sites (Empire Docks, Valino Island, Charleston Boat Basin, Transpacific Lane).